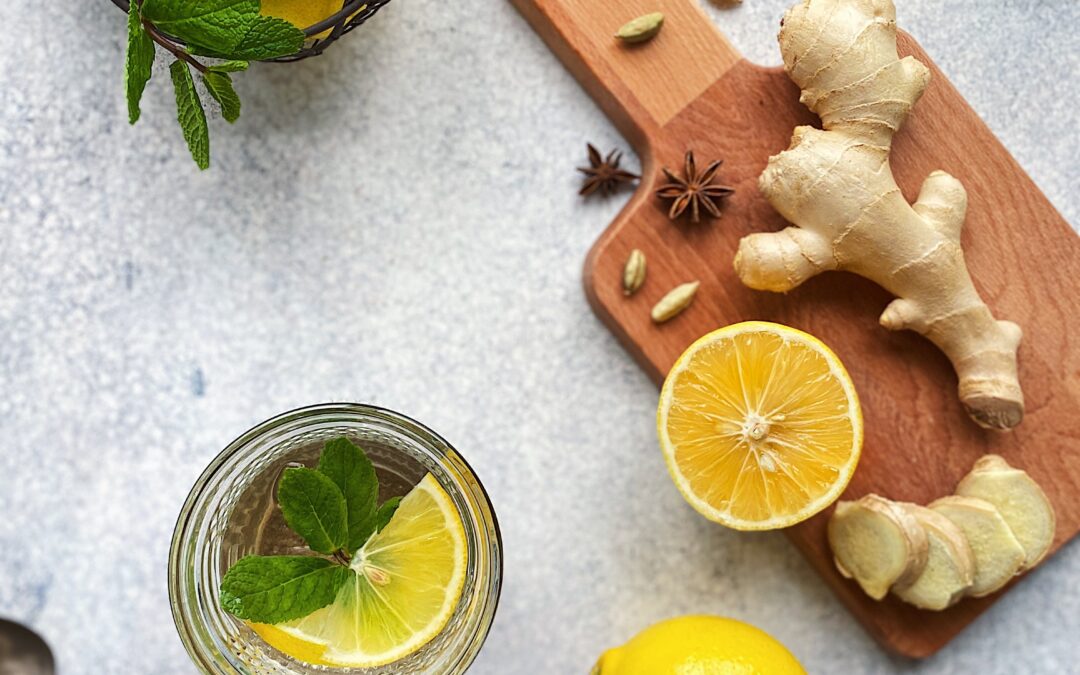 Ginger has been used in both culinary and medicine for thousands of years across many cultures. From flavoring a variety of dishes and drinks to home remedies to adding great health benefits to our lives. And Today more than ever its properties are very beneficial during the times of crisis we are living.

But What is Ginger? What do we know about this spicy root?

Ginger comes from a flowering plant known as Zingiber officinale. But the ginger we see in grocery stores are the roots of the plant, which is why it’s sometimes called ginger root.

There are over 1,300 species of plants in the Zingiberaceae (ginger plant) family. The spices turmeric, cardamom, and galangal are also in this family.

The most common edible ginger roots are yellowish in color. And, there is also blue ginger, red ginger, and white ginger. And you can sometimes find different species of baby ginger, which are actually the young roots of a ginger plant and are often pink and cream-colored.

Ginger plants grow in hot weather, therefore Ginger is grown in tropical or subtropical climates. Most ginger consumed worldwide comes from Southeast Asia, where it first grew wild in rainforests. China, India, Nepal, and Thailand are the largest producers of ginger.

Ginger has an intense flavor punch. The more mature the ginger root, the stronger the flavor. So you don’t need a lot of it to flavor a dish. And when it comes to ginger’s health-boosting properties, a little bit goes a long way.

Ginger is high in vitamins C and B6, along with magnesium, potassium, copper, and manganese.

It is great for Gut Health and Weight Maintenance, something most of us suffer nowadays, because It’s full of both fiber and water. It’s also low in calories and high in phytochemicals — the active compounds in whole plant foods that protect your health.

Most of ginger’s health benefits appear to come from its abundance of polyphenols, which protect the body against oxidative stress. Ginger contains three main polyphenols: gingerols, shogals, and paradols, in addition to being high in antioxidants.

So what are the Health Benefits of Ginger?

Antiviral
Ginger has antibacterial, antifungal, and antiviral properties. Normally, viruses like the common cold, or influenza, enter the body and attach to cells, causing a systemic infection. But ginger has demonstrated the ability to suppress this attachment from occurring and to prevent viruses from continuing to grow within cells.

So next time you get a cold, and specially nowadays with the Coronavirus going around, consider making yourself a nice cup of Ginger tea before going to bed. You can also add Lemon and Honey for extra vitamin C and natural antibiotic effect.

Anticancer
Gastrointestinal cancers are among the most common and lethal types of cancer in the world. But a 2015 review showed how ginger had been used to both prevent and reverse gastrointestinal cancers. Test tube, animal studies, and human studies all suggested that ginger suppresses the growth of cancer cells and, in fact, causes them to self-destruct (a process known as apoptosis). Ginger could even enhance the anticancer effects of a chemo drug, 5-fluorouracil, which may encourage further human studies on its use as a cost-effective, complementary cancer treatment.

If you are fighting this disease, there is a lot of ways you can add ginger to your diet. From smoothies to stews, soups, pickled ginger like the one served with sushi, one of my favorites by the way.

Antiemetic – effective against vomiting and nausea
Perhaps ginger’s most well-known health benefit is its effectiveness against nausea and vomiting. In many countries, especially China and India, a ginger tonic or tea has been given to help calm digestive discomfort and disorders for thousands of years.

There are over thirty years of research dedicated to this particular application of ginger. Showing its effectiveness against nausea and vomiting, especially in relation to both pregnancy and chemotherapy.

In studying ginger’s effects on chemotherapy-induced nausea and vomiting, a double-blind cancer patient trial reported significant reduction in acute nausea. Participants received either a placebo, half a gram of ginger, one gram of ginger, or one and a half grams of ginger. All patients who received any of the ginger doses, at all three levels tested, found nausea relief.

Treats and Prevents Harmful Gut Bacteria
Ginger also aids gut health by targeting certain bacteria with its potent antibacterial activity. A recent 2019 study in Advanced Pharmaceutical Bulletin concluded the use of ginger was helpful in treating functional dyspepsia as a result of the bacteria H. pylori.

In addition to easing or eliminating uncomfortable symptoms, ginger therapy completely eradicated the harmful gut bacteria in half of the test subjects. That’s a big deal, considering H. pylori is notoriously difficult to get rid of.

So if you suffer from gut problems, ginger is a great natural medicine option. You can drink it as tea or grab a Kombucha with Ginger next time you are at the grocery store. I personally Love Kombucha and it has helped me improve and reduce my stomach problems significantly due to the probiotics found on it. But that’s a topic for another article. Ginger kombucha is one of my favorites by the way.

Pain Reliever
Ginger also works as a multi-faceted pain reliever. In an earlier article published on The Food Revolution website, Dr. Michael Greger examined ginger’s use as an alternative to the migraine drug sumatriptan. The results found ginger worked equally as well, but with fewer side effects. Plus, it’s a lot cheaper!

Ginger has also received acclaim as a natural pain reliever for menstrual cramps. A randomized, controlled trial on 120 female Iranian students with moderate to severe menstrual cramps tested the effects of ginger to see if it would help. The students received either 500mg of ginger powder in capsule form or a placebo three times a day. They further split into groups that received the treatment either two days prior to menstruation plus the first three days, or the first three days only. In both cases, where ginger was given, there was a significant reduction in pain, compared to the women who took the placebo.

So Women, we all suffer from these symptoms, let’s run to the store and grab some ginger right now.

Because it works as an anti-inflammatory, ginger also shows promise for muscle and joint pain. One study showed that the daily consumption of heat-treated ginger relieved exercise-induced muscle pain. And other studies have examined ginger’s effect on osteoarthritis, a painful degenerative joint disorder, with moderate but promising results.

Cardioprotective Benefits
Can a spice fight the world’s #1 killer, cardiovascular disease? Research on ginger’s ability to protect the heart is ongoing and promising.

Studies are showing that daily ginger consumption decreased the risk of both hypertension and coronary heart disease. Maybe we should start saying, “A dose of ginger a day keeps the heart doctor away”!

Neuroprotective
Research conducted by Neurologists Drs. Dean and Ayesha Sherzai shows that up to 90% of Alzheimer’s cases may be preventable through diet and lifestyle. Well, now it seems that ginger might be one of those neuroprotective foods you’ll want to add to your diet. In-vitro tests using one of the bioactive compounds found in ginger, gingerol, showed potential anti-inflammatory effects by acting on cells that essentially turn on cells and proteins within the brain that cause neuroinflammation.

What about Potential Side Effects of Ginger?

Although the benefits of ginger outweigh potential side effects for most of us, there are still a few instances that call for caution.

Gastrointestinal Discomfort
Studies show that consumption of more than six grams of powdered ginger at a time can cause gastrointestinal symptoms such as diarrhea, heartburn, and upset stomach.

But that is A LOT of Ginger that one would probably never eat.
One tablespoon of ground ginger weighs about six grams ― that’s equivalent to about ⅔ cup of fresh ginger.

So if you do decide to consume a lot of ginger, you might not want to go above ⅔ cup of fresh ginger, or three teaspoons of ginger powder, per day. And frankly, if you did decide to eat that much, I’d have to wonder about your tastebuds. Because ginger is, after all, a spice!

Allergic Reactions
As with almost any food, allergic reactions to ginger are possible. However, no skin prick test currently exists to test for ginger allergies.

Can Prolong Bleeding
Research suggests that some foods, including ginger, potentiate the effects of warfarin (an anticoagulant drug) and increase the risk of bleeding during surgical procedures. According to the Cleveland Clinic, though, small amounts of ginger (think seasoning, not a major component of your diet) should be fine.

Central Nervous System Depression and Arrhythmia
Although ginger’s blood pressure-lowering effect is beneficial to some people, in others, it can cause blood pressure to drop too low. So if you suffer from low blood pressure you might want to reduce your ginger intake or even avoid it.

How can we find and consume Ginger?

In addition to fresh ginger root and powdered ginger, you might also find pickled ginger, ginger tea, dried or preserved ginger, and candied ginger (not my favorite since is prepared with lots of sugar!). Under normal circumstances, ginger and ginger products are readily available at most grocery stores and markets.

Asian and Indian markets are also a good bet for ginger and ginger products.

How to Pick and Store and Use Ginger
Like any fruit or vegetable, ginger root can go bad if not stored properly. This is also good to keep in mind when you pick out fresh ginger at the store. When shopping for fresh ginger, look for roots that have shiny skin without any wrinkles or soft spots. And obviously, if you see signs of mold or other discoloration, that’s a sign that you’re looking at a piece of ginger that’s a no-go.

Fresh ginger is a root, and you can store it in a cool, dark place like other root vegetables. Typically, it stays fresh this way for about a week before it starts to get wrinkly looking. At that point, or if you cut it before then, you can store it in the refrigerator or freezer. In the fridge, use a resealable bag in the crisper drawer. It should last for up to a month in the refrigerator. If storing in the freezer, make sure to cut it into smaller pieces, about one to two inches long, and peel them. It’s much harder to peel ginger after freezing. Frozen ginger can last for up to six months.

A cool benefit (one of my favorites) of frozen ginger is that it grates much more easily than fresh ginger. The “strings” that can gum up a regular grater or mandoline simply snap off when the ginger is frozen.

As for other types of ginger like powdered, dried, and ginger teas, most store well in a cool, dark place. Pickled ginger can go in the refrigerator once you open it. These types of ginger are less likely to go bad, but they may lose some of their spiciness over time.

I’ve previously shared a Carrot Ginger Soup on my social media, as well as my Green Smoothie that has some ginger, or lots of it according to my kids.. lol. Check out my page for more free recipes!

Based on the article : “Ginger Benefits and Side Effects” by Ocean Robbins on www.foodrevolution.org

Get our weekly Menu

Every week you will receive an e-mail with our latest menu.

You have Successfully Subscribed!